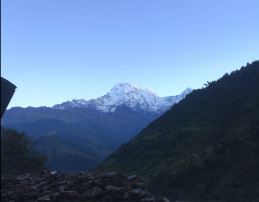 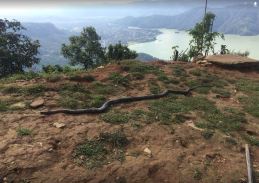 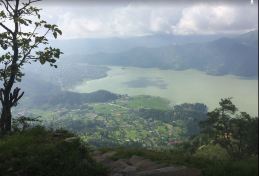 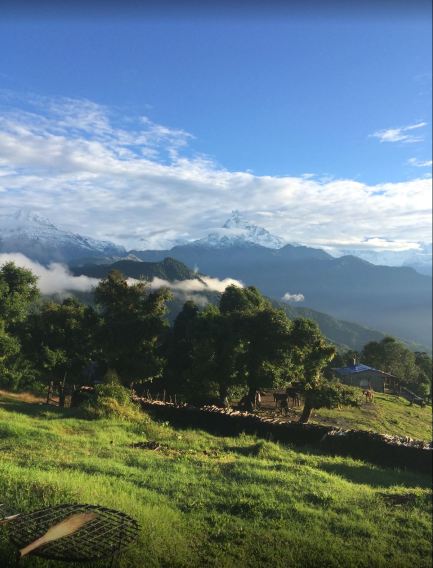 The next morning the wet shoes took their revenge as I felt a cold gathering to leap from nose to throat. My sinuses were making me miserable. A Claritin took care of that. We had a few leeches as we walked through wet grass but not many. On a road again Ethan paused in amazement before a huge, gloptious heap of poop. He had never before seen what a water buffalo can deliver. Just after, he saw his first water buffalo, large, grey, chewing sideways and peering nearsightedly from under curved horns.

We stopped for a rest at a restaurant/guesthouse run by a husband and wife. She spoke some English and wanted to know if I was Ethan´s mother. When Ethan said “Grandmother” she was delighted. She wanted to know my age (in Nepal I get more attention, reverence, regard and adulation for my age than I can possible deserve) and then volunteered that her father was 85, her mother 84. She herself has nine grandchildren. The couple has made their house bright with pots of flowers. She sells bits and pieces but I was not interested in carrying even a little bit for the next few days. I wished her health and happiness when we left.

Sarosh bought a cucumber from her, which he sliced and we ate with salt. The entire day as we walked on various roads between staircases we saw only one motorcycle and one car, the latter crammed with Nepalis plastered against its windows. As we walked in the afternoon Sarosh stopped and brought us to the side of the road where we could look over the edge, down the hill. There, amongst the trees, were dark faced gibbons swinging on long, long pale arms through leaves beginning to turn yellow. There is something about gibbons with their curvaceous tails, dark faces set in the tight hood of their pale fur, with their enormous arm span, that for me has an aura of innocence. Perhaps it is a nostalgia for my own innocence because I too delighted in swinging from trees on shorter arms when I was a girl. The monkeys in the temples in Kathmandu, on the other hand, do not strike me as having any innocence at all.

Just as we were coming into The Australian Camp, so named because Australians camped there, it began to rain. I was jubilantly grateful that we had escaped it.

I spent time with an old acquaintance, a French pug whom I had met on my last trek here but he had met too many travelers in the intervening years and didn´t recognize me. There was also a hyper cat who jumped into your lap wanting to knead you all over as it purred wildly. It also talked incessantly rubbing against you all the time. Even when it walked it kneaded the floor with its paws. Hyperthyroid?

The next morning, at 5 am, the views of Fishtail (Macchapuchare) and various Annapurnas were magnificent. It was probably our best view and certainly our longest as it lasted several hours before the clouds began to pile up around the peaks like snow banks.

As we started down from The Australian Camp I found the front of my thighs were agonizingly stiff, odd muscles around my knees incredibly sore. I was also just plain tired. However, as we walked, picking up leeches around my ankles and two on my hands, the muscles stretched out and stopped hurting. We went down and down, at one point through a stream, and then mud, passing lots of people, small houses, fields, dogs intent on their tasks and at one point a troop of donkey going up to be loaded.

Around ten we came out on a road where a Tibetan woman tried to sell me a key chain that she claimed had fossil coral on it. Definitely not. I was so angry at her misrepresentation that I moved off abruptly. Ethan at the same time was being worked over by her husband but also didn´t buy. When we got into the car I was most relieved. We drove to a small town with a bus stop at its center. I recognized it and the store we stopped at which has a very white, miniature poodle who is king of his corner.

His coat was cut but not in the usual manner. This was a home job. He looked like he received his trim from the same person who cuts the hair of more than middle-aged French and German ladies, presumably with a rusty hatchet.

We started walking from there along a road which is in process—up rooted trees, mud, deep ruts and a jack hammering machine. We had lunch in a nice town where I had stayed on a previous trip. The house we ate at is across from a small Hindu temple beside a little pond. There used to be trees along the edge of the pond. Sarosh pointed out that they had chopped the trees down. I can´t imagine why. Certainly it does not improve the view.

Over lunch we met some New Zealanders, a family that travels together as, I think, a sort of annual reunion—mother, probably my age, a plump daughter, a slim, smart daughter and a rough, tattooed son in middle age. They were fun to talk to because they traveled individually and together all over.

We arrived in Sarangkot at the Lake View Lodge where we had large rooms with ensuite bathrooms that looked down to Pokhara and the lake. If Sere and Sarosh hadn’t been looking after us, I´m not sure we would have ever received our dinner the wait staff was so muddled. But the view of the lights around the lake below us was a perfect distraction as was conversation with the New Zealanders.

We were up at 5:45 to climb up the hill to see the mountains, which were close, huge, white mammoths. Unfortunately there were lots and lots of us, as well as music and some girl in floating garments doing a dance with a fan. I turned my back on her and tried to ignore the music. The mountains are never an experience that needs to be enhanced.

We were a very international bunch with Chinese, Nepalis, New Zealanders, us and a group of men in tee shirts printed with a message about a smoke house in Texas. They were nice Americans who were, I thought, a bit reluctantly voting for Trump. They knew, of course, immediately, whom we would be voting for.

Returning to the Lake View Lodge we had a huge, muesli, hot milk, two eggs, toast and tea, breakfast. Then we started our long walk down. It is two hours to the road. Toward the end of our down we passed various people, most of whom struck me as about to be in trouble. There was a Scotsman and his girl friend, both looked in good shape, but already he was having a serious problem with the heat, walking without his shirt. In that sun it is not good to go shirtless. There was a single young man who struck me as having a sense of what he had gotten himself into and then an older, late fifties, heavy man whom, it seemed to me, was doomed. We also passed a very dead, large, snake. At first we were not sure it was dead so we stood at a respectful distance until his prolonged stillness reassured us. In Thailand he would have been scooped up for supper.

We got down without any accidents although I slithered a couple of times and walked on the rock road to the main road where we were picked up by a pretty, blue car whose driver was very proud of it. We were delivered to the airport where Sarosh, God bless him, got us on an earlier than expected flight. In Kathmandu we were picked up by the young man with the elephant hair bracelet and taken to the Kathmandu Guest House where I handed in my laundry, sat down and wrote over a cappuccino.

View all posts by karenswenson7289095